On a beautiful spring morning, go players from around the country gathered at the Cotton Building at Victoria University in Wellington for the 44th NZ Go Congress.

That first early morning at a congress is always a curious thing.  There is a mixture of weariness at the inevitable early start on a Saturday, nervous energy generated by the prospect of a tough contest ahead, pleasure at meeting old friends, and delight at making new friends who share the same passion! 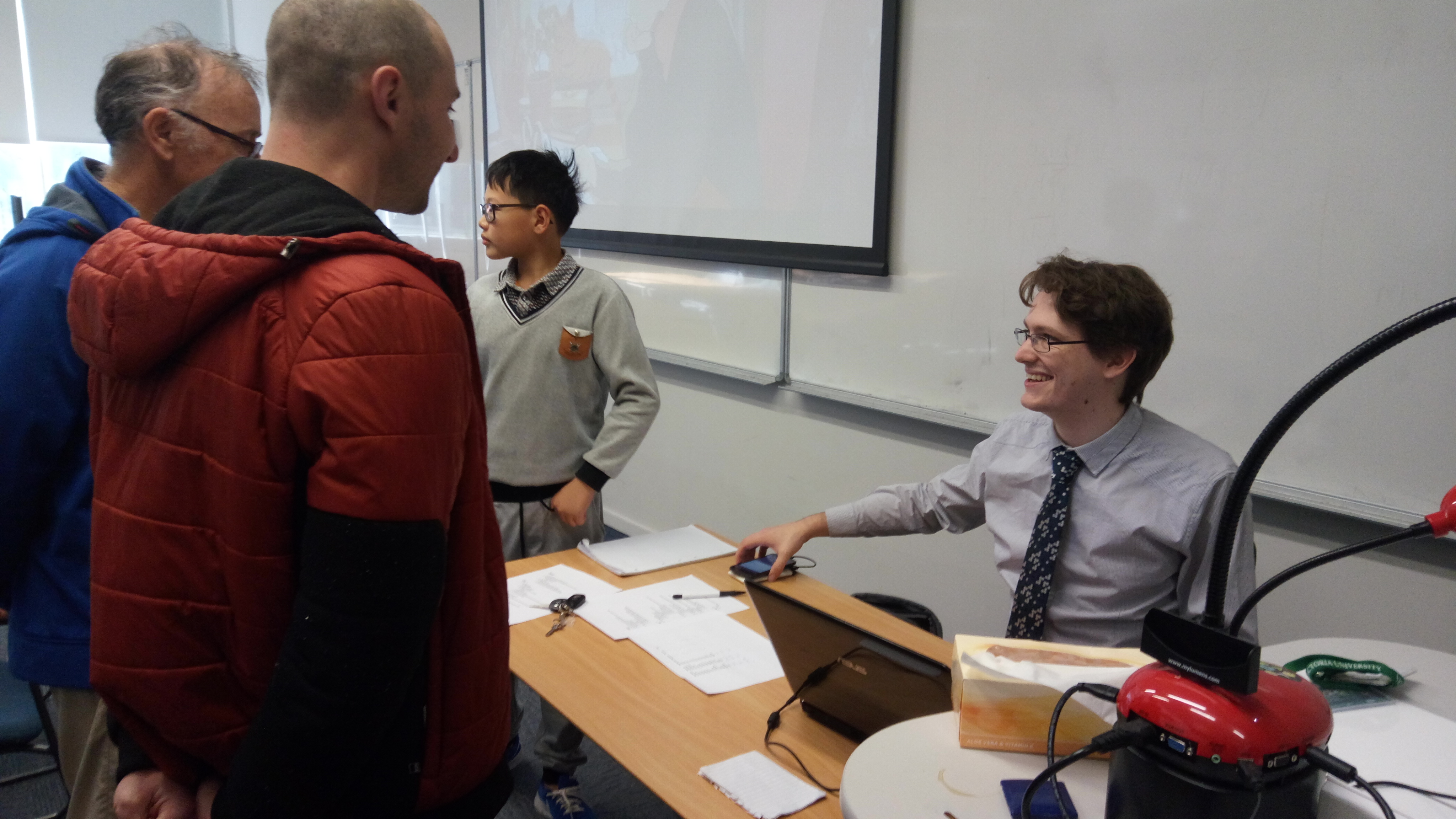 It was not the biggest field ever for the congress but all fourteen of us were there ready to dedicate the next two days to giving our best on the go board.   The tournament organizer, Joshua Scott, denied himself that pleasure to put his energies into ensuring a smooth tournament for the rest of us.   This was an admirable sacrifice that ought to be emulated, as the tournament ran very sweetly.  The practice of having two rooms for the tournament, one for playing and the other for post game analysis, was particularly good. 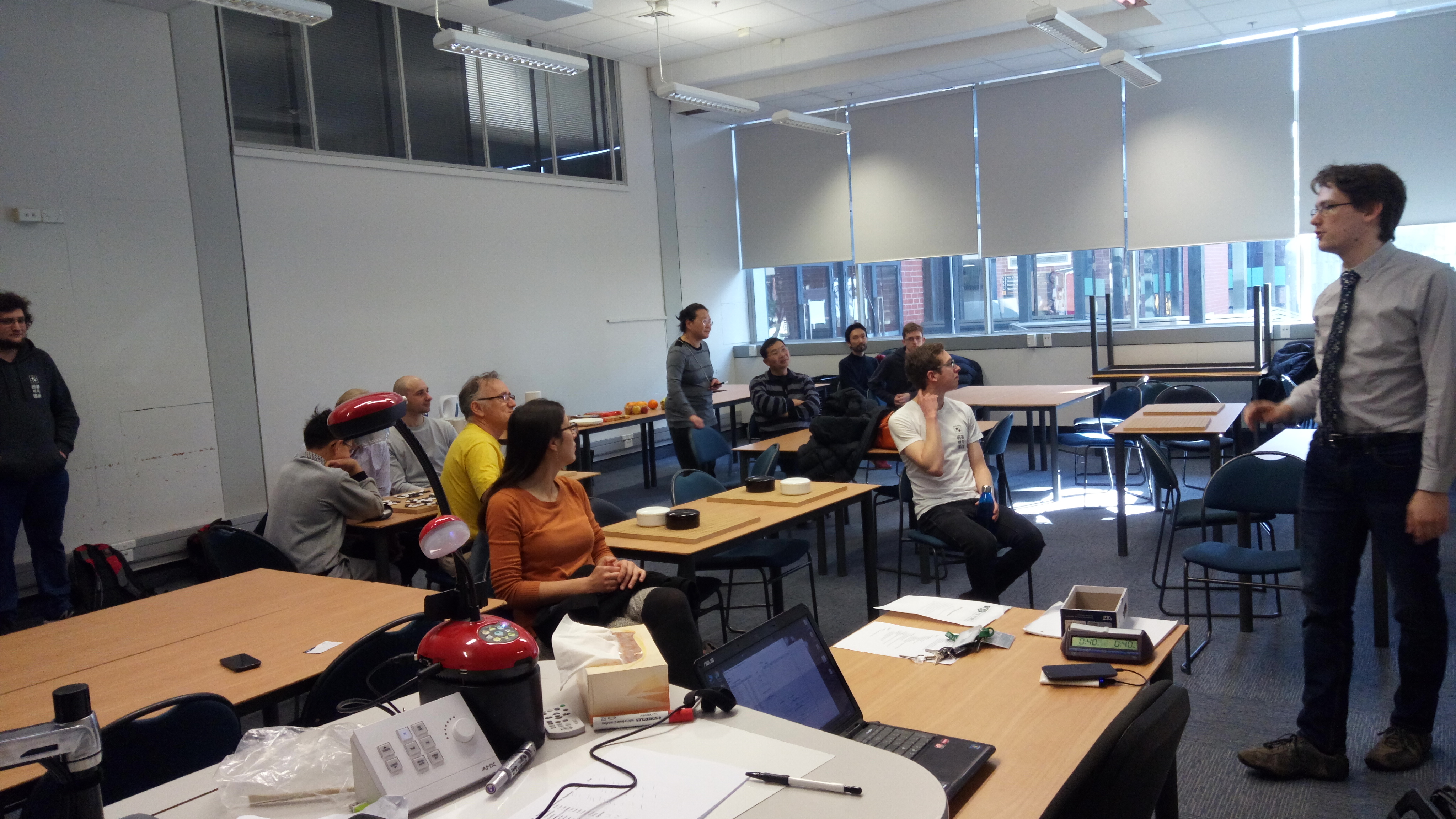 Joshua explains the format of the tournament

Round 1 paired players using a “split and slip” system that takes the top half of the players based on rank, and pairs them with the bottom half.  It produced a couple of amusing coincidences, pairing the first ever(?) French nationals in the NZ Congress (Manon and Sylvain), and pairing the oldest (Graeme) and youngest (Hulin) players.  It was great to see both Manon and Sylvain at the congress, especially in the year when France became the top European country in the Pandanet European Team Championship, deposing Russia.  Hulin was a 3d at school in China but his strength has slipped a little in the absence of regular strong opponents. 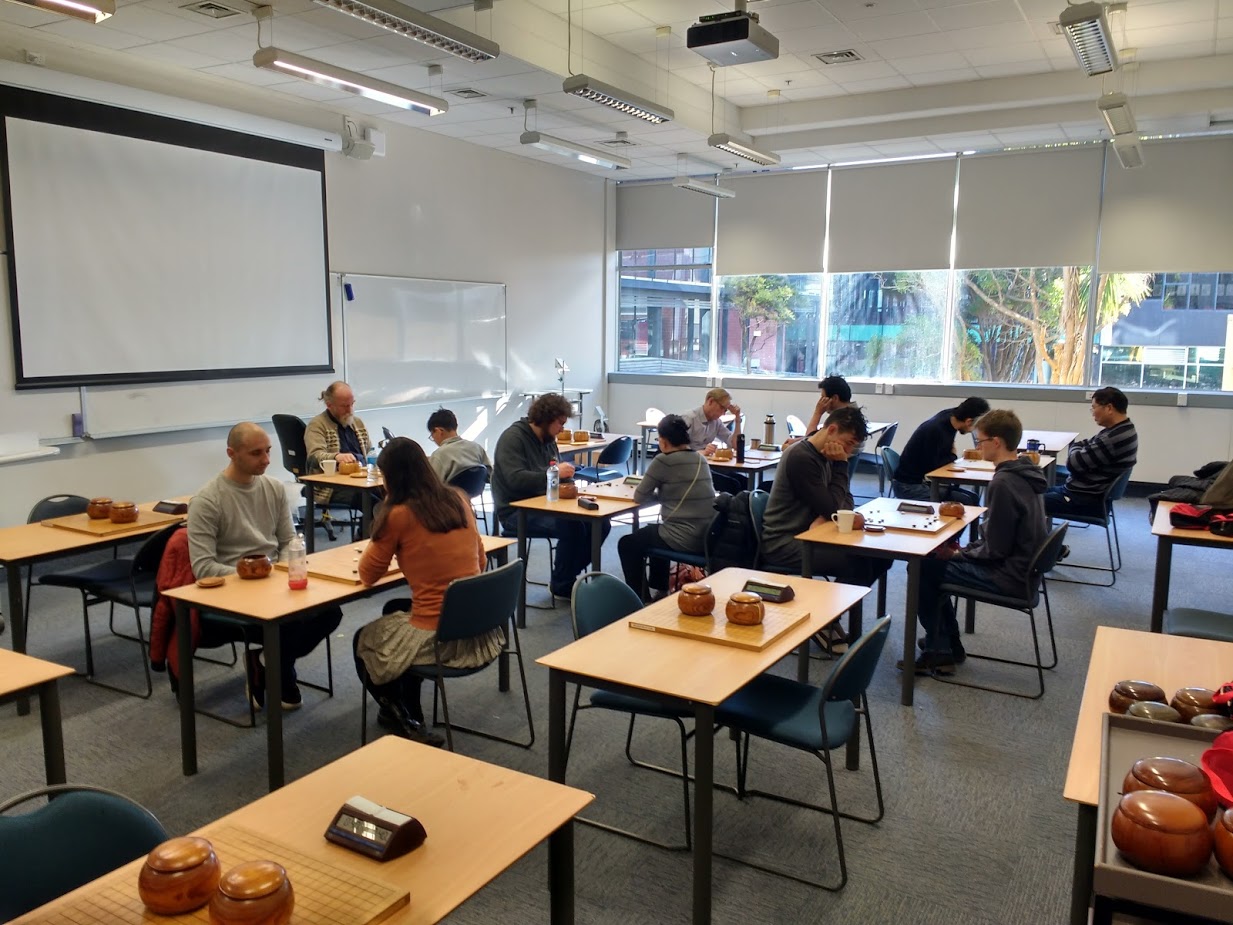 Round 2 was notable for Sylvain’s (1d) win against Colin (4d).  Sylvain had for a long time been stuck in the 1-3kyu range but explained that studying online lessons had, in the space of a year, increased his strength substantially.  Kyu players contact Sylvain for details!

Round 3 was energized by a comical outburst from Colin in his game with Hordur.  He appeared to have exploded from his seat, leapt in the air and slapped his hand down on the table in frustration at a tesuji of Hordur’s.  “I told him to play there!” exclaimed Colin, presumably never expecting his advice to be followed, or not fearing the consequences if it was.  His initial conviction that he had blown the game dissipated as he discovered a way to recover from the temporary setback.  Hulin gave Fergus a fright with a very nice game in which he surrounded large territories that looked sufficient to win, but some carelessness over defects in his shape led to the loss of a group.  Amongst the single digit kyu players from the Victoria Uni club, Christopher won bragging rights over Greg.

Lunchtime on Saturday saw a demonstration of a puzzle that may not yet be solved.  The challenge was to find the smallest number of black stones and in what arrangement are they, such that white cannot create a group that is unconditionally alive on a 19x19 board if black passes every single move?  The current minimum is said to be 121. 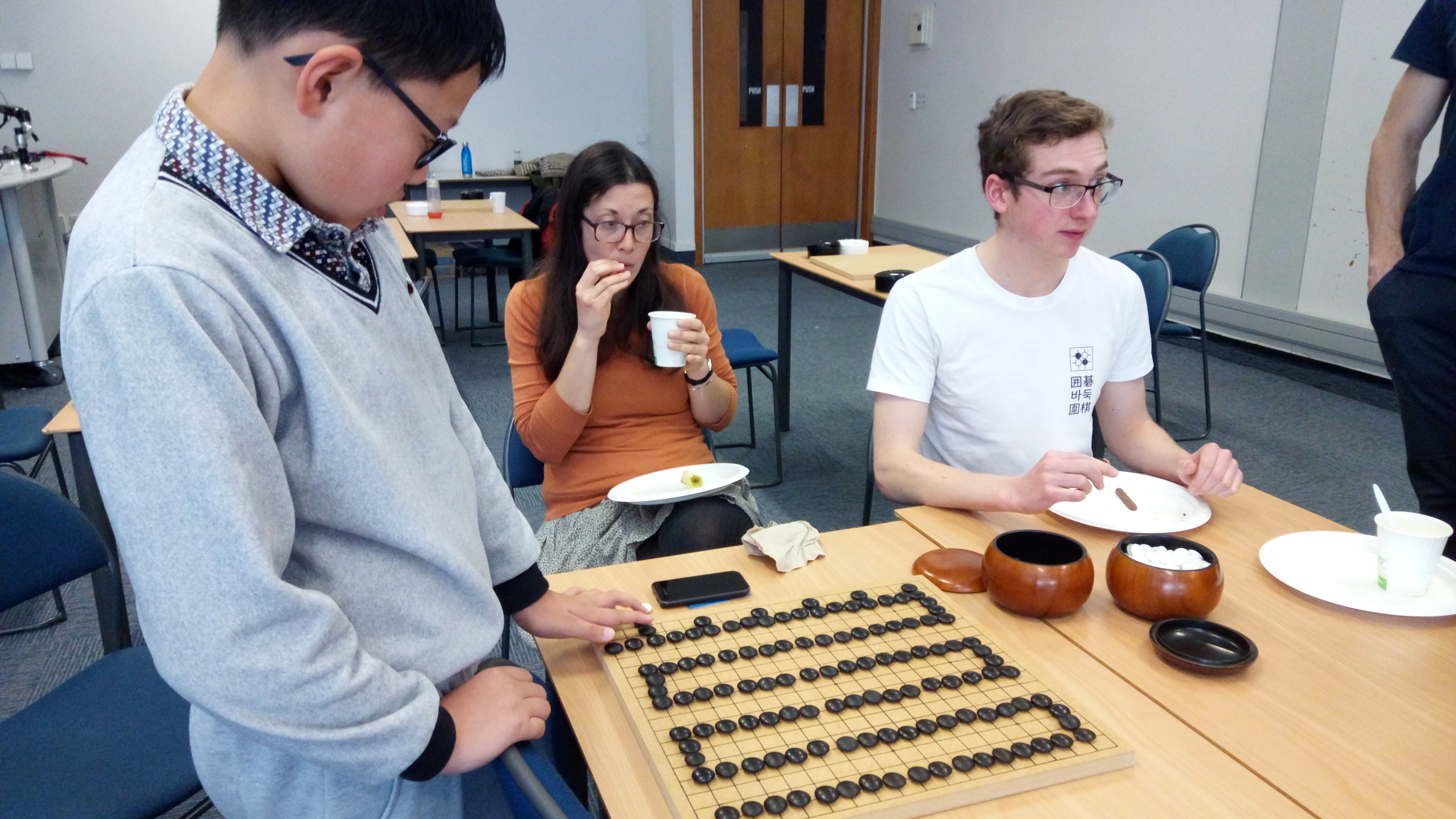 Hulin contemplates the puzzle while Manon and Chris finish lunch

The AGM was cleverly scheduled between the end of round 3 and dinner.  The longer the AGM goes the hungrier everyone gets so prolonged debate is discouraged.  Reports from the President and Treasurer were not tabled, so Colin, our long-suffering secretary, ad-libbed for a while …...  There were no motions proposed in the Agenda, but various roles in the NZGS that need to be filled were described.    Officers elected un-opposed were Kevin Liu as president, Joshua Scott as treasurer and Colin Grierson as secretary.  Two ordinary members of the committee were also elected – John Chen and Sylvain Gantois.  The committee is expected to co-opt further members to fulfil some of the roles previously discussed, including webmaster, newsletter editor and promotion.  In other business, a motion proposing that minutes of committee meetings be posted on the website after each meeting was passed.  Yu Cong initiated the most interesting discussion of the night with her question to the floor about whether protection of the name and logo of the NZ Go Society were possible.

After dinner at the excellent Arashi Kushiyaki everyone vanished into the night leaving the bars of Courtney Place untroubled, presumably to prepare themselves for the rigours of day two of the tournament. 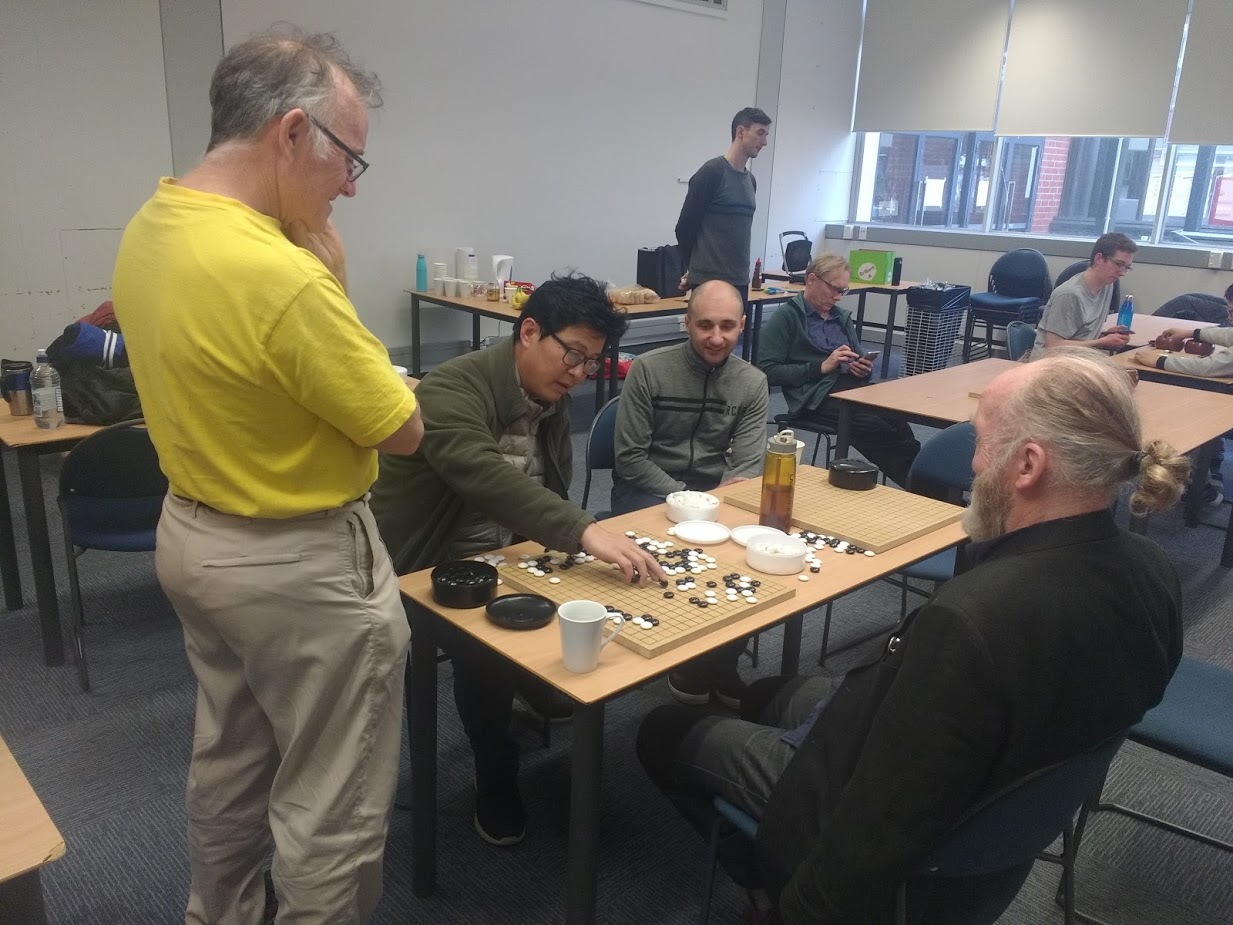 Round 4 was showdown day!   Sylvain played Fergus in a battle of the 1 dans.  John played Yu Cong in a duel of the 3 dans and Charlie (5d) and Graeme(4d) fought to see who would remain the only unbeaten player.  After the dust settled, Sylvain, John and Charlie emerged victorious.   The top board was a long game, with Charlie well in control for most of it (see game record).

Round 4 Charlie beats Graeme by 6 points

In Round 5 Colin had to face the Wrath of Han while John, trying not to kill a large group of Graeme’s may have caused the biggest win rate swing at the tournament when in the space of 10 moves he managed to reverse a good lead with an unnecessary ko followed by a non-ko-threat.

Round 6 progressed with few alarms apart from Hulin’s excellent win against Hordur.  Colin gained some redemption with a win over John and Charlie beat Sylvain to remain undefeated and become the 44th NZ Go Champion! 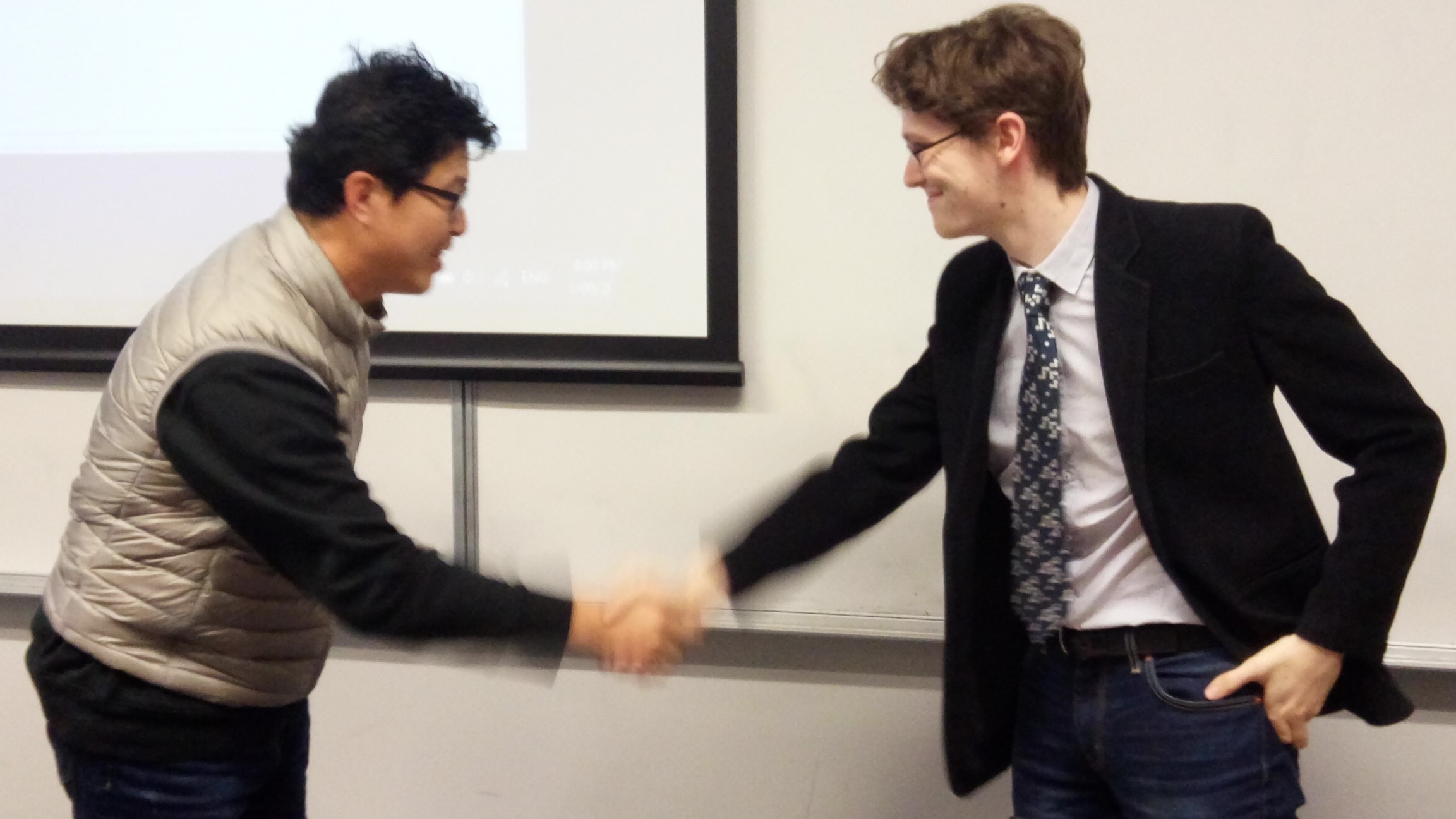 Congratulations to our new champion and thanks to Victoria University Club for hosting an exceptionally well-run tournament.