We plan to archive all the early printed newsletters of the NZ Go Society on the website.   This series covers the period 1975 until 1995.

We will add five years’ worth of newsletters to the archive every month so as not to overwhelm those who might have some interest in the origins of the game in New Zealand! 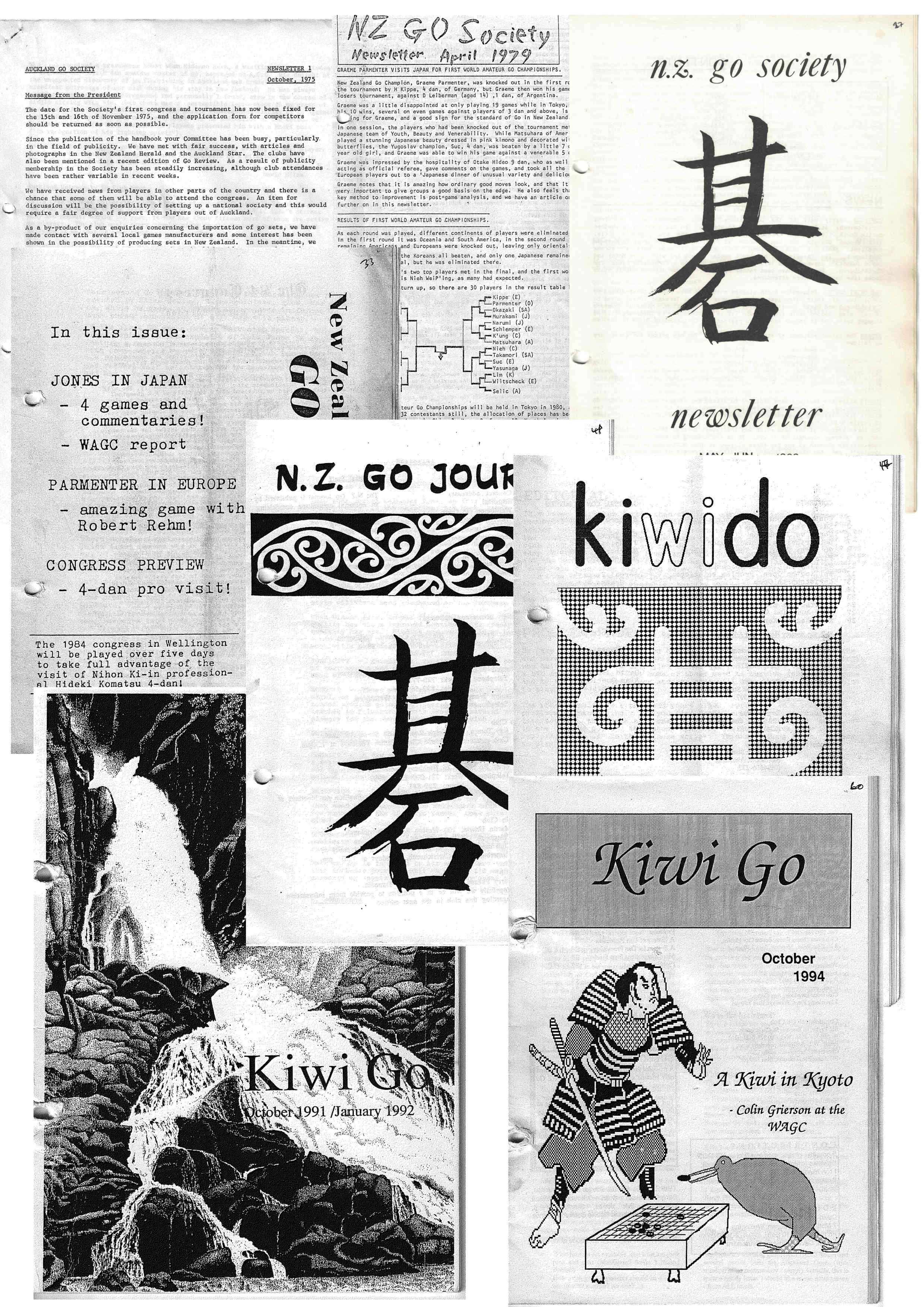 The history of the NZGS newsletter begins before the NZGS, with the Auckland Go Society.  The first five newsletters were all published under the banner of that organization.

They report the 1st Auckland Go Congress, held in November 1975 and attended by 19 kyu players, including Kurt Flatow from the Sydney Go Club who won Division 1 of the tournament.

Bob Talbot, the secretary of the Auckland Go Society was providing the teaching articles in the newsletters with hand drawn and labelled diagrams on the vital subject of “Connection”.

The newsletters include a discussion of a “New” system of counting (Chinese method) from Ray Tomes and an article on computer go!

They also give indications of players in other parts of the country, with reports of clubs formed in Wellington and Dunedin and announce an official visit to Australasia by professional go players from Japan.

On 10th July 1976 Bob Talbot became the first home grown dan player when he was given the rank of 1 dan by the Auckland Go Club committee.  Bob learnt the game in the pubs of London before becoming one of the leading lights of the Auckland Go scene.

The 1st New Zealand Go Congress, was also announced for 1976, signaling the inevitable formation of a national go organization.

The 1st NZ Go Congress was hosted by Auckland and players at the tournament agreed to form the New Z Go Society.  To solve the delay involved in formulating a constitution it was decided that the Auckland Go Society would change its name to The New Zealand Go Society and a new constitution for that organization would be adopted at the Go Congress in 1977, held in Wellington.

In 1976, the bookshop was started and Ishi Press books became available to NZ players.  That staple of NZ players the Elementary Go Series was selling for a mere $2.50-$3.50 per volume!

In 1977 Ishi Press began publishing Go World, and suddenly new go players had access to commentary on professional games and up to date teaching articles.

That same year dissatisfaction with the NZ rules of go began to be expressed and after the Chinese rules were published in Go World No 5 NZ adopted these at the 1978 AGM.

In 1979 NZ was one of only 15 countries to attend the 1st World Amateur Go Championship becoming a foundation member of the International Go Federation.

[To view these newsletters click on "Newsletter Archives" and scroll to the bottom of the page to display more items.]