Newsletters for the period 1985-1989 have been added to the NZ newsletter archive.  To see these select News/Newsletter Archive and use the arrow keys to scroll through the archived newsletters.

The five years of NZ go reported in these newsletters shows NZ Go in a very healthy state with annual tournaments in Auckland, Wellington, Christchurch and Dunedin regularly attracting 10-15 players.

The NZ championships were moving between different centres each year with a record attendance of 31 at the Christchurch NZ Champs in 1985, a field boosted by 4 players from Australia.

The Australians were in NZ to participate in the 3rd trans-Tasman match, won by NZ 10-6 in Hanmer.  That was followed up in 1987 by an even bigger 13-3 win in Canberra.

New Zealand players were also beginning to knock over 5-6 dan players overseas which given our limited opportunity for face to face games with strong opponents was encouraging.   Our WAGC results were solid if not spectacular with two 16th places and two in the mid-20’s.  One placing remains unreported to this day but given that the NZ representative was distracted by the wooing of his future wife, that is understandable!

In 1987, the need for a NZ based rating system was promoted to help recognize ranks of players as they improved.  The practice of awarding dan certificates to NZ players had lapsed several years earlier.  A discussion document appeared in the February 1989 issue, suggesting some difficulty gaining consensus on how to do this.  A rating list was published in the July 1989 issue with the ranks of over 50 people calculated.

On his return from the 10th WAGC Ray Tomes was accompanied by a very fine goban which he presented as the prize in a new competition called the Go Kichi.  This was competed for by challenge, with the winner retaining the goban until defeated by a challenger in a 5-game match with the holder hosting the challenger.  This competition was very popular and provided some wonderfully fierce 5 game matches.  It appears not to have been competed for in recent years though could be revived if we can discover where the board now resides!

Newsletters 1980-84   Another batch of newsletters have been added to the archives for the period 1980-84.   To see these click News and Newsletter Archive and scroll down to find the earliest newsletters.

That development was assisted by visits from Japanese professional players, from the Nihon Ki-in in 1977 (Sensei Shirae, Ito and Kondo) and 1981 (Saijo Masataka), and in 1983 from the Kansai Ki-in who sent Inoue sensei accompanied by Mr Shirakami as translator.  He became a great friend of NZ go and helped pave the way for the wonderful relationship that developed with that go organization.

The NZ rules were formulated by Ray Tomes in 1980, using the Chinese rules as a starting point but adding a more rigorous definition of terms.

Computer printed diagrams began to replace hand draw diagrams in 1982 and the comparative ease of printing games meant more games appeared in the newsletters giving NZ players a chance to assess the skills of fellow go players around the country.

A “continuous rating tournament” developed earlier by Ray Tomes in Auckland was adopted by clubs throughout the country and provided players with a measure of their improvement.   The NZ Go Society officially recognized NZ Dan ranks for a few years though that practice appears to have ceased by 1984!  Ray’s analysis of the barriers along the rating path was instructive, highlighting a major mountain at 5kyu (Jan 1980).

With the WAGC giving players a chance to play players from other countries we began to get a sense of how our ranks stacked up internationally.  When Ray placed 8th at the 4th World Amateur Go Championship (March-April 1982) beating higher ranked opponents from Singapore and Hungary we began to feel a little cocky, though that remains the best placing by a New Zealand player at the WAGC.

Ishi Press was the source of all knowledge for NZ players at this time and the NZGS bookshop did a good trade in their books. Go World, the most stylish Go magazine you could hope for, with its Japanese Edo period prints as covers, started publishing in 1977.  It was NZ players’ access to the professional go world in Japan and beyond.  It’s editor, the Australian John Power, went on the edit and translate the finest go book in English (Invincible, The Games of Shusaku. Kiseido. 1982).

These were the days when the only way to play go against other people was to sit over a go board with them!  Go Fests began in the South Island as informal gatherings of players to test each others’ ratings over the course of a weekend with + or - 0.5 adjustments in rating after each game.

Kami Kaze’s Korner was a beloved fixture in the newsletter, a cornucopia of the curious, the crazy and the downright certifiable.   There was an early piece on Computer Go (Jul-Dec 1982) and an interview with a 16 year old Michael Redmond (July 1980).

The newsletters began to give NZ players a sense of their place in the go world, and with our own set of rules, representation at the WAGC and respectable results against international competition, we were encouraged! 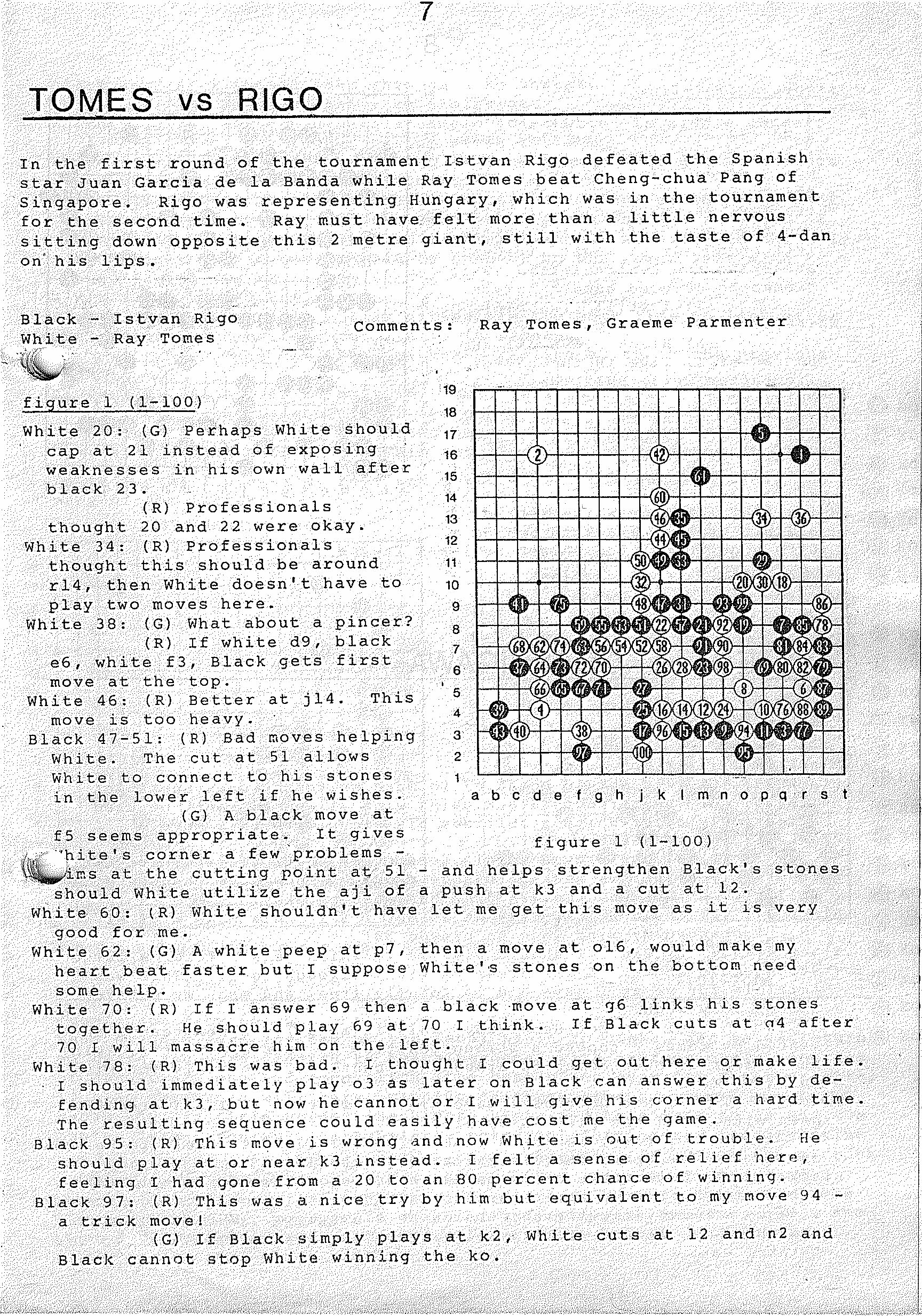 Page 7 from the March April 1982 newsletter reporting the game that placed Ray Tomes 8th in the 4th World Amateur Championship.